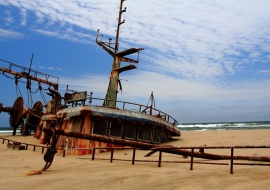 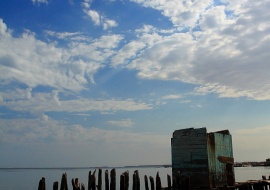 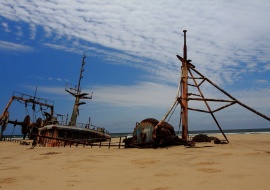 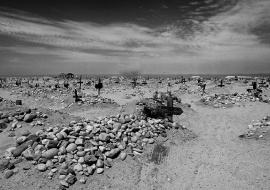 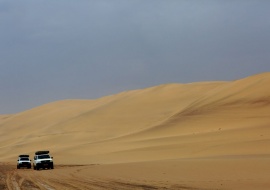 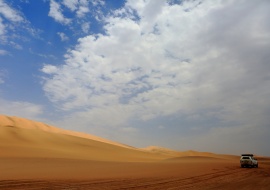 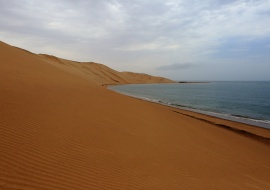 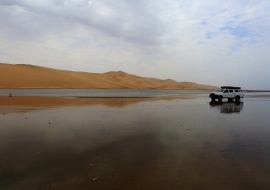 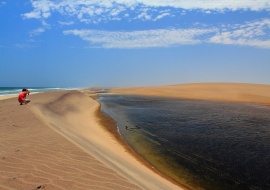 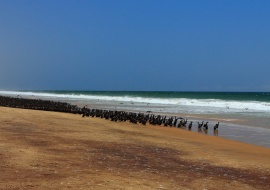 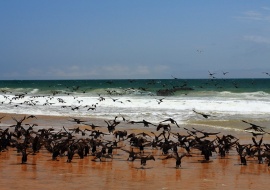 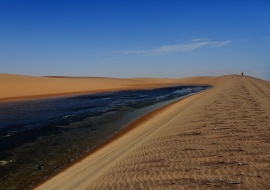 ... is very dangerous because for 30 km, an error in the appreciation of the depth of the sand can cost you to stay blocked, if you do not calculate well the tide times, you can lose the car because of the rising tide, in addition Of this, we must take into account the mists and storms of sand. Since there is no mobile coverage, roads, food, shelter, or assistance, you risk your life too ....

But we could not leave Angola without looking at that balcony.

From the beautiful town of Tombua begin the dunes of the desert. The distance according to the GPS is of 170 km until the mouth of the river Cunene, also call Foz de Cunene.

The wild landscape of the coast is spectacular, driving without many problems during the first kilometers finding wrecks that could not reach the port and were stranded in the dunes.

The beach is narrowing as you advance and the dunes on your left are getting higher, until reaching the so-called "Critical Zone", where there is only a separation of 3 meters between the towering dunes and the Atlantic waves , So a bad calculation of the tides can put you in serious difficulties.

I have called it the enchanted coast, not only because of the wonderful landscape of the dunes by the sea, but by the surprise that you find after passing the "critical zone", groups composed of hundreds of cormorants, pelicans, flamingos and correlates , Stand up to your step in a show of color and sound that is forever engraved in your retina, numerous families of sea lions rest half-buried in their beaches, as well as green turtles.

Before reaching Foz de Cunene, you will find the Das Piedras Peninsula separated by a few meters from Isla Tigres, creating the spectacular Bay of Tigers, hundreds of birds,and sea lions are the quiet inhabitants of this incredible place, in its shallow waters

And turbid species abound several species of shark, among them the great white shark whose main food are the offspring of sea lions.

Without a doubt, "The Costa Encantada" is still a place where nature still sets its standards and rhythms. I hope for a long time.